You are here: Home / Current Events / The New Year

Greetings in the majestic name of our Lord Jesus, the Morning Star. Every morning there is newness, and Jesus is standing there to show you new things that can exist in your life. If you are a true follower of our Lord, He will show you the path that He has set before you.

If you chose to take that path, He will change you from glory to glory and make you more into His image, allowing you to be a partaker of the very life of God.

The New Year is a time of opportunity to reset and have a fresh start. Certainly, most would not want to go back and make past mistakes again. We want to move forward, and in doing so, reach greater achievements. God created the concept of time for us so we may have landmarks of our growth. We can look back on the landmarks and see that “things which once were not, now are,” and know greater things can be accomplished. Our landmarks are our testimonies of victory, not of failure.

Do not remove the ancient landmark, nor enter the fields of the fatherless.

There are numerous landmarks in the Scripture, and many of those pertain to Bible prophecy. When God spoke to man about a future event, and it came to pass exactly as He proclaimed, they would often build physical landmarks for the remembrance of these great events. On a grand scale, consider the birth of Jesus and His death, burial, and resurrection. These events have marked the whole earth. Christmas is recognized all over the world as a holiday, and mankind’s very calendaring system was divided into B.C. (time Before Christ’s birth) and A.D. (time after his death, burial and resurrection). Specifically, A.D. stands for Anno Domini, which is Latin for “In the Year of Our Lord.” 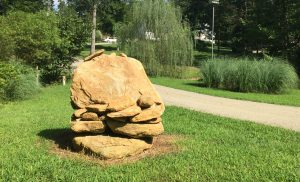 We also see personal landmarks in Scripture. King David had landmarks in his life that he drew upon for strength and courage. When he was a young shepherd, he defeated the lion and the bear, so when he faced Goliath, he was able to look back at those landmarks. His past experiences and victories gave him faith in his God knowing that God was a deliverer. He did not discredit those events by belittling them or merely brushing them aside as coincidences (or worse, believe they were of his own doing). No, David knew his God was his source!

You may say, “I don’t know if I have any landmarks?” To that, I say, “Count your many blessings!” You can start with the God of heaven and earth who gave you His only begotten Son so that you may have eternal life. That life started when you received Jesus. And it is not just an eternal human life, but an abundant God-kind of life. You cannot partake of this God-kind of life unless you spend time with God and find out what is possible. Many receive the new life and never grow; they stay spiritual babies.

We are instructed in Proverbs 23:10, which we just read, to “not remove the ancient landmark.” The second part of that verse reads, “Nor enter the fields of the fatherless.” What does this mean? Fathers help to mature their children. Many men today are not fathers, but baby daddies. As men, we should be like Abraham, close to God and raising children up in the admonishment of the Lord.

For I have known him, in order that he may command his children and his household after him, that they keep the way of the Lord, to do righteousness and justice, that the Lord may bring to Abraham what He has spoken to him.”

As a son or daughter, we must not enter into a fatherless field. Even if your earthly father does not perform his godly responsibilities, you must seek a spiritual father—one who will teach you about the heavenly Father. This is what is so great about the Body of Christ; it is available to everyone, or should be. Having a relationship with a spiritual father will help you in your relationship with your heavenly Father and will allow the Lord to manifest His great and precious promises to you.

In this New Year, I encourage you to look to Jesus and all His benefits. Let’s not focus on our failures and shortcomings, but on our God-given landmarks and victories. Let’s follow after true spiritual fathers that followed their fathers before them, and not young leaders who still need fathering themselves. Be mindful not to be led into the field of the fatherless where there are no manifestations of the goodness of God.

The following verse came to me on New Year’s Day, and may it be our resolution and determination this year to follow our fathers!

So Elisha turned back from him, and took a yoke of oxen and slaughtered them and boiled their flesh, using the oxen’s equipment, and gave it to the people, and they ate. Then he arose and followed Elijah, and became his servant.

Elisha’s dedication led to more manifestations of God than were seen by Elijah. So can it be for us too. Let us follow after fathers-in-the-faith whose works bear fruit, so that we may also learn to bear fruit and much more than those before us.

Thank you for your financial and prayer support. We are believing to conduct several Revelation Conferences this year, so please be in agreement for the opportunities to do so. The first one will be in Tampa, Florida at Overcomers Community Church on February 8-12, 2017. The time is now, Jesus is coming soon! We must see Jesus and ourselves as the Mighty Triumphant Kings we are! There is no better book to unveil this than the book of Revelation.

Michelle and I call you blessed, healed and whole in Jesus’ name!