You are here: Home / Current Events / Hooks in Russia’s Jaw

Greetings in the name of our soon coming King, our Lord Jesus Christ. Recent events in Syria pertain to Bible prophecy and, for that reason, are very exciting. Russia has attacked Syrian opposition forces on behalf of the President of Syria, Bashar al-Assad. Vladimir Putin, the President of Russia, announced to the United Nations that he supports the Assad regime and that Russia is going to play a bigger role in the fight against ISIS. Within days, Putin put forces on the ground and dropped bombs on Syrian rebels, yet the fight was not directed toward ISIS.

Are Russia, Syria, and Iran really working together to fight ISIS? Well, maybe some, but their true objective seems to be fighting Syrian opposition. The alliance of Russia and Iran is clearly seen in Ezekiel 38:1-6. Also, the city of Damascus, the capital of Syria, has been prophesied to be destroyed and become a ruinous heap, according to Isaiah 17. This area is a flashpoint that could go “poof” at any time.

Russia has taken this step forward because of a lack of leadership exhibited by United States President, Barack Obama. The forces Russia is now bombing were trained by the U.S. for the purpose of defeating Syria’s Assad regime. It should come as quite a slap in the face to President Obama just days after the two leaders met for over an hour concerning the matter.

History reveals that the United States and Russia have competed for Middle Eastern influence since the end of World War II. In the mid-1950s, Egypt wanted to build the Aswan Dam on the Nile River. The United States and Britain were going to help fund this endeavor; however, after a highly criticized Israeli attack on Egypt, President Nasser of Egypt switch his fundraising efforts to needed supplies for his military. The U.S. and Britain would not allow their funds to go toward Egypt’s military and backed out of the agreement. It was Russia who stepped in with military support for Egypt.

Consequently, Egypt did not have enough money to build the Aswan Dam. Infuriated by the United States and Britain’s lack of funding for this project, Egypt took over the Suez Canal that was under British and French authority to help pay for the Dam. The French and the British influenced Israel to attack Egypt in a backhanded attempt to regain control of the Suez Canal. As Israel attacked, Egypt, France, and England stated that the two must stop the conflict immediately. Failure to comply would bring the British and French military into the conflict for the purpose of saving the Canal.

Within days, the French and British troops arrived in the Middle East and proceeded to drop bombs and attack Egypt. This caused Russia to rally to Egypt’s defense, threatening the use of nuclear weapons against Britain and France. It took the United States coming in, and once again being the peacemaker, to settle the conflict. Ultimately, Egypt kept the Suez Canal and built the Aswan Dam with Russia’s help.

Why is this important? Bible prophecy reveals that Russia is intervening in the Middle East because our heavenly Father put hooks in Russia’s mouth for this purpose.

I will turn you around, put hooks into your jaws, and lead you out, with all your army, horses, and horsemen, all splendidly clothed, a great company with bucklers and shields, all of them handling swords (Ezekiel 38:4).

In the beginning verses of Ezekiel chapter 38, we find a leader named “Gog” within a geographical area known as “Rosh, Meshech, and Tubal.” Today, this geographical area is known as Russia, and “Gog” is Vladimir Putin. The hooks were put in place many years ago, and now we are witnessing how well they are set in the jaws of Russia, as Russia is led back into the Middle East. 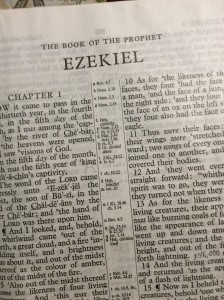 In past time, Russia played a role in the Middle East peace talks along with the United States. Now we see them taking the lead with military action. This is exactly what the second half of Ezekiel 38:4 is describing. Now remember, when prophecy starts being fulfilled, it can be sped up or slowed down to suit the Father’s purpose. Most of the time, His purpose is for mankind to come to the saving knowledge of His Son, Jesus. These events let us know we are closer to this Ezekiel 38 war than we have ever been; however, we are not quite there yet. As this fulfillment of prophecy is illuminated to those of us who watch the signs of the times, we see the importance of soul winning, for we know time is short.

Your assignment is to win souls for the kingdom of heaven. Whether you win souls one-on-one or do so by connecting and supporting a soul-winning ministry like ours, the day is soon coming when Jesus is going to shout, “Come up here!” At that moment, those whom He finds “doing” will be taken to the judgment seat of Christ for their reward. Don’t be found napping on the spiritual couch!

We are busy. Thank you for your prayers and financial support. Michelle and I are praying for you and your family to increase in spirit, soul and body. May this season of the harvest be great as you reap what Jesus has provided.

Bless those who persecute you; bless and do not curse.
Romans 12:14

Do your best to present yourself to God as one approved, a worker who does not need to be ashamed and who correctly handles the word of truth.
2 Timothy 2:15