Greetings with the joy of the Lord—His joy is our strength, and His Spirit is our power.  Once again, as a nation, we need His strength.  When devastating attacks of antichrists come as in the recent school shooting, God is our strength. We must stir up joy in our spirits in the knowing that God is good, and He is just!  The wicked and evil powers will not get away with this; they will get their due punishment.  We don’t have to lift a finger, pass judgment or a law, but just keep being an influence for Jesus’ love.

Many want to blame this recent attack in Florida on guns or mental illness.  Neither is to blame.  This is the work of demons with people who are not experiencing God’s love or power.  They are blinded to the knowledge of His Word, and the power of His Spirit!

To say this man was insane or temporarily insane is absolutely false. People who carry out these kinds of attacks are not insane, and they are not mentally ill.  I know many of you would argue with me about this assessment, however, consider this.  The definition of insanity is the state of being “seriously, mentally ill” or “madness.”  One can say “feeble-minded.” These people cannot function in society.  They cannot take care of themselves.

From Jack the Ripper of the 1880s to Charles Manson (the murderous mastermind), Jim Jones (the murderous false prophet) and most recently, Nikolas Cruz who committed the multiple murders at Florida’s Marjory Stoneman Douglas High School, mass murderers have all functioned in society.  Someone who is insane requires a caregiver to take care of them, so these people mentioned are certainly not insane. Their unprovoked murder is seeded by antichrist spirits.  They hear voices in their heads and/or demons appear to them and direct them to commit horrible acts of violence.  Jesus says,

“You are of your father the devil, and the desires of your father you want to do. He was a murderer from the beginning, and does not stand in the truth, because there is no truth in him.”

Satan is the murderer, and those who commit murder are of him for he is the father of murder.  You don’t even have to commit murder—you only have to have hate in your heart for other human beings.

Whoever hates his brother is a murderer, and you know that no murderer has eternal life abiding in him.

So, check yourself. If you have hate for someone because of how they treated you or because of their color, religion, or political beliefs, then you are on your way to murder.  Remember, this is going to start as a seed of Satan.  He sows his seeds as thoughts and then waters those seed until someone allows them to manifest as unprovoked murder. Many in our country are in this condition and need deliverance. You can see it in our politicians, school campuses, television, cable shows, and in cities, big and small.  Then the nation wants to know why a mass murder happens.

Joy Behar of the television show, “The View,” says people who hear voices in their heads are mentally ill.  However, you hear your voice in your head every day.  In fact, there are three voices that talk to you: Your voice, God’s voice, and the devil’s voice.  God’s voice influences you to do what is right, and the devil’s voice influences you to do what is wrong. Ms. Behar is daft not to recognize the influence of spiritual voices, good and evil, not to mention the hatred she speaks.  Our country has to come to this revelation and quit trying to place the blame somewhere else.  Boy, does the devil like it when you’re thrown off his trail!  This leads to a question, which voice of the three will you act on?

You may say that you’ll heed the voice that you want to, and that’s right!  Your “will” is the deciding factor.  So, how do you formulate your “want to”?  It is determined by what goes into your spirit.  Anything you can see or hear will affect you:  television, music, Internet, books, etc.  Are these influences in your life good or evil?  How much death do your eyes see?  How much life, and things that bring life, do you see?  What are the words to the songs you listen to and is the music soothing or obsessively driving?

All of these influences feed and enhance the volume of one of the two voices you hear, other than yours.  Dr. Roy Hicks puts it this way:  “There are two natures within my chest, one is cursed, and one is blessed—the one I love, and the one I hate.  The one I feed will dominate.”

Society as a whole thinks nothing of demonic influences.  Those who believe and attend a solid Word church are more likely to guard against these spiritual adversaries. As for my house, we rarely watch an “R” rated movie.  As my wife says, “It is rated ’R’ for a Reason.”  Once in a very blue moon, when it is based on a true story, we may watch one.  Even then, watching some scenes will turn our spiritual stomachs.  Most of the time we wait until they edit the movie for television, and still, it may be disturbing.  We try to spend our time God-focused.  Even if it is not a Christian activity per se, we try to put things into perspective of the Word of God.

Our country has a lack of godly perspective and influence.  This is because of the slow and calculated plan of the antichrist spirit that has deceived even the very elect of the Church.  It is time to repent and run to God for our family’s benefit. These antichrist spirits have caused our country to discount God’s Word. We have passed laws that are contrary to His Word and given into philosophies and ideas against Christ (the presence of God). Our country is in the hands of the believers of Jesus.  If we will truly follow Second Chronicles 7:14 and carry out the Great Commission, we, the Church, can be a mighty influence. 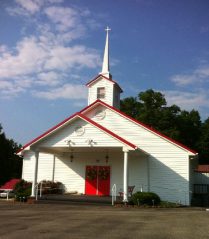 “If My people who are called by My name will humble themselves, and pray and seek My face, and turn from their wicked ways, then I will hear from heaven, and will forgive their sin and heal their land.”

Our influence will not change the fact that these End Times will be dangerous and dark.  However, it will make our country powerful under these severe conditions and give people an understanding of God’s love and faithfulness—delivering hope.  This demands a strong Church, being led by the Spirit, with the truth in its mouth, thus sustaining our nation.

I believe you are a part of that great End-Time Army, the Glorious Church!  We are praying for you to be equipped and willing to lay down your way for His.  Thank you for helping us equip others and rescue them from the gates of hell.  Your prayers and financial support allow us to do more for Jesus, and we sincerely thank you.

Accept the one whose faith is weak, without quarreling over disputable matters.
Romans 14:1